I feel a prick as the needle is quickly inserted. Red trickles out as the sun moves in, beginning my day in the lab at the clinic.

My goal is to learn about genetic testing – why that is so important and how the clinic does it in a way that differs from the majority of research labs. The children come with nothing more than symptoms, the doctors have to tell them why those are showing up, and the lab is the place to find the answers. And I am acting the role of geneticist, biochemist, and laboratory technician. But since it is my DNA, I am also playing the part of patient.

Here’s what I found.

-Genetic testing is an astoundingly long and meticulous process.

Becky, the laboratory technician, guides me in the use of a device called a centrifuge to remove from my blood its red blood cells and undissolved proteins (the molecules the do the work of cells). We add many chemicals using a hand-held gadget called a pipette to suck up less than an eighth of a teaspoon of fluid, shaking the tube with the help of a vibrating Vortex machine to create a homogenous mixture. After many steps in what seems like an uber-recipe for chocolate souffle, I end up with a tiny opaque corkscrew, the width of a fingernail. My DNA! I cannot believe that something so tiny, the consistency of something I would blow into a tissue, holds all the information that makes me who I am and the potential for whom I will become. 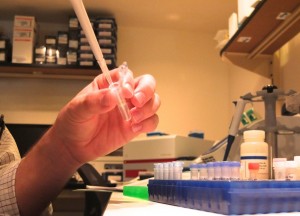 -DNA mutations can be horrific

Becky and I tested my amino acid levels, which can be thought of as the building blocks of proteins. If I had had an amino acid called L-alloisoleucine in my plasma, I would have been diagnosed with Maple Syrup Urine Disease, a horrific condition that plagues roughly 1/400 Old Order Mennonites as well as children throughout the world. The name comes from the sweet odor of the urine and ear wax. If untreated, the disease can cause seizures, coma, and death. With time and tremendous effort, the Clinic came up with a nutritional supplement that can work around the altered amino acid. The team now tests its infant patients for the disease so treatment can begin before the child is 24 hours old.

-There’s so much “stuff” you can do to DNA

Adam, the Clinic’s Administrative Director and Laboratory Scientist made many, many copies of my DNA in a machine that performs the so-called Polymerase Chain Reaction. It is something like a molecular Xerox machine that reproduces me-in-a-test-tube, over and over. I am cloning myself by amplifying my DNA. How cool!

-DNA codes for not only diseases, but also features

Adam and I “melted” apart the two strands of my DNA, tracking the temperature at which the melting occurred. That gives a clue as to whether or not a mutation exists. We tested my DNA for a mutation that causes Maple Syrup Urine Disease. Thankfully, I was negative for this mutation. I am however, a carrier for blue eyes (so my future children may be blue-eyed).

-I can eat cheese without fear

Adam and I analyzed a short section of DNA that resides in my mitochondria (Yep DNA is present there as well and in the nucleus of cells). I remember from my science classes at Brookline High that mitochondria are the hot dog-shaped structures that act as batteries for cells. From that test, I discovered that I am lactose tolerant, unlike most of the world. That means that my plans to study abroad in France will fill with great joy, as I scarf down plenty of chèvre on my baguette!

Why does the clinic need its laboratory, even more than I need my cheese? Because to the kids who come to the clinic wanting answers for their problems, DNA analysis can provide many. I learn that most clinical labs -the ones where you get pregnancy or cholesterol tests – do not do routine genetic or amino acid testing. Yet, when uncovering genetic illness, knowing the DNA-make-up is everything. The clinic charges money for these tests, but it is the bare minimum of the cost of the test itself. Thus, the Clinic works hard to get the extra money to cover the time and work of Becky, Adam, and others in the lab. That’s where the annual auction and donations come in. The Clinic staff helped me understand. Hopefully, my experience will help you.

I now know that I don’t have Maple Syrup Urine Disease, am a carrier for blue eyes, and am lactose tolerant. I am a couple steps closer to discovering who I am. Who will I be? Someone who makes it part of her life to champion causes like the powerful work of this tiny lab.